I have been wanting to do a Strength and Weakness blog on JA and see what everyone thought about whether he would be a fisrt grade quality half one day or even a top first grade half. However, unfortunately for JA its not just about JA, JA cannot be separated from BA. So this is an assessment of JA-BA.

1. Defence: He is a 19 year old half-back so defence is not critical. His defence is not terrible but for the team JA's defence has been a weak link. I have no doubt that given a few years he will be a solid defender and his defence is only an issue for playing him now and will not affect his career prospects as a half.

2. Kicking and passing: For the last 12 games his kicking and passing was promising but accuracy not consistent enough for first grade standards and usually did not provide a result. Given his age this is not a negative and he has plenty of time to reach first grade standard. I would rate his current kicking and passing skill around the level of DB and CG but well below MM. However, BD and CG have other strengths and roles, JA is trying to be a playmaking half and he is not at first grade kevel yet but has promise. Last game against Manly he nailed two try assists (one pass and one kick). This shows a lot of promise but lets not get carried away until he can do it consistently.

3. Acceleration and power: This is way below average for a half. I have not seen a first grade half this bad at acceleration and power since Peter Sterling. So maybe it is possible for JA to succeed; however, in todays game there less room for players who cannot threaten the line. The problem is that the other team 100% know JA will pass the ball (unless inside the 20 or last tackle) and they can smash the recipient. Even if JA did decide to run, the opposition would have plenty of time to close the hole they left. For this reason I cannot see him being first grade quality until he gets stronger and can push through the line a bit for an offload. I expect our right side to be easily contained by quality teams. Although JA nailed two high quality try assists, outside the 20, we really did not threaten and I do not remember Papa being able to break the line like he usually does.

4. Game management: I hear he is a good leader but the Reserve grade games I have seen I see no evidence of it. I think it was the one against the dogs when we were losing by a small margin but not on the right path to winning. It needed a good leader to turn things around but this did not happen. However, he made some good decisions on which play to make in the second half against Manly. Also there is no way in my mind a 19 year old is going to lead a team of first graders. So we will see in several years time.

5. BA: BA to me seems to be all about JA. This can be seen by BA's post match comment "I am very gratefull to the team for giving Jake the opportunity to play well" (my memory of what BA said). TCT claim this as BA being humble. But to me it reflects that it is all about JA. I coach my kids teams (not RL) and I would never say that. It just seems to me BA is all about JA's development and screw the rest of the team. JA never ever should have pushed DB out of 5:8. It is more important to develop DB for the team than JA. DB has proven higher potential in my book and is a priority and DB still has below average parts of his game at half that needs practice at first grade. JA is not a utility and not a bench hooker. That is disrespecting a bunch of other Parra players who are better suited to those roles. JA absolutely should be MM replacement - like for like. However, the primary play maker role sould be DB as he really needs to work on this and should improve him for when MM gets back. So bringing JA on as the secondary playmaking half - like what hapened against Manly was appropriate. However, it is not all about JA. Sixties is already claiming JA should be our full-time utility and this seems to reflect BAs thoughts. This is deluded. Not good for JA and more importantly not good for the team and our prospects of winning.

Conclusion: JA as a first grade half shows good promise; however, the limiting factor is his lack of acceleration and power. This makes it unlikely he should be a consistent first grade half for a few years (at least). The big problem for JA is BA putting him where he does not belong. It is not good for JA and more importantly it is not good for the team. BA does not seem able to stop being a 1eyed father and that is not tenable as a professinal coach. 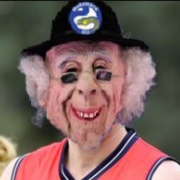