A look at each club's record at attacking inside their opponent's 20-metres and defending in their own red zone finds the Eels and Sharks bucked a trend that otherwise found the best clubs were the best red-zone specialists.

At the lower end, wooden spooners the Titans struggled far more than any other club while the Bulldogs, Cowboys and Panthers had plenty of trouble in this area.

This statistic rams home how much 2019 was a 'what could have been' type of season for Sharks fans.

The club had the second-best attack inside 20 after the Roosters, and the third-best defence in their own 20 behind the Roosters and Raiders. 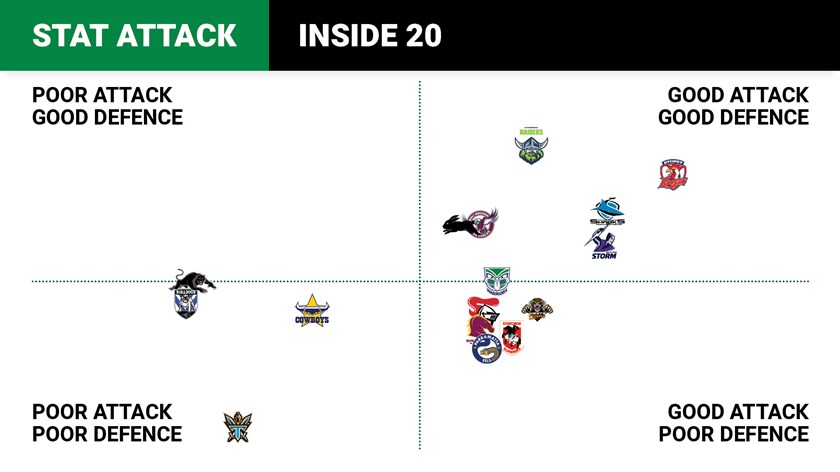 It also highlights just how costly those games were in which they scored more tries than their opponents and lost on goal-kicking, with a top-four finish totally achievable for John Morris's men had things gone a little differently.

This metric also suggests the Eels have some work to do at both ends of the field to catch up to the competition heavyweights with their efforts defending their own line worse than any club bar Gold Coast and their attack just eighth-best.

There were other areas the Eels countered these weaknesses however; they were one of the best long-range attacking teams and also scored plenty of tries from kicks, meaning they weren't as reliant on wearing down opponents at the goal-line for points.

A good yardage game and a good long kicking game and the fourth-best possession ratio in the NRL meant their weaknesses defending their own line weren't exposed as often as they could have been either.

All up, 9.5% of attacking possessions led to a try – bang on NRL average and well below the 10.8% average of the top four. But it was their defence – with a huge 11.1% of defensive PTBs yielding a try – that was the worry. The NRL average was 9.4% and for the top four it was just 7.4%, highlighting a big area of potential improvement.

The Roosters, with and NRL-best 12.6% of attacking PTBs leading to a try and just 7.0% at the other end (trailing just Canberra's 6.6%), were the standout club.

"Sorry, but as much as I agree changes are needed, this would have to be one of the most stupid posts I have read on this site in well over ten years.  Wooden spoon, to consecutive finals appearances and a competitive team.  Get a grip.  What a…"

I really like Clint Gutherson as a player and he's improved heaps since he first came to Parra and he's high energy and he brings so much to the Eels side. I'm just wondering if the Eels would be better having a Captain amongst the forwards ( who is…
See More

Current Thoughts on Gutho as Captain

LOOK AT THIS AND GIVE YOU'RE GENUINE THOUGHTS