The 2014 novel The Deer Effect, by Susan Wingate, features a unique narrative device. The story is told from the perspective of the newly departed wife, Hannah, as her spirit observes her husband (Rod) deal with both grief and a quest for revenge. Hannah narrates both her own experience of and her understanding of Rod’s story of loss, redemption, and forgiveness. Fans of the Mighty Parramatta Eels surely know the out-of-body experience of which Hannah reports. After Grand Final losses 1976-77, there were the idyllic GF-winning years of 1981-1983. Following a GF loss in 1984 and a Preliminary Final loss in 1985, Eels fans returned to nirvana with the emotional GF win of 1986. Club legends like Price and Cronin then retired. Despite tantalizing close calls in the form of GF losses in 2001 and 2009, to be an Eels fan since 1986 is to have been on a 36-year-long out-of-body experience. We have observed loss. We all wish to observe redemption. A win. When fortune shines on our beloved Eels on Sunday evening, we will extend forgiveness. For that 36-year wait. Wingate’s words are instructive for any Eels fan over the next few anxious days: “Bravery in real life offers many challenges … One simply needs to act toward the best possible result rather than to ponder all of the possibilities”. Possibilities be damned, best result is an Eels victory, redemption is nigh, forgiveness forthcoming.

Notes: The Eels have recalled Nathan Brown. That is the news. Commentators are suggesting it is a trick play. Maybe it is more like Rocky II, where Balboa switches from southpaw to right-handed, to better protect his blindspot? Micky had wanted Rocky to switch back to southpaw later in the fight, but Rocky says “no tricks, I ain’t switching”. Is Nathan Brown’s inclusion, not a trick play, but more like what Micky advised Rocky, “Go through him, run over him”? For Penrith, Staines retains his wing spot. One would think May’s injury would have been suspended until next year? The Panthers’ army of trainers, ready to disrupt play, is on standby. 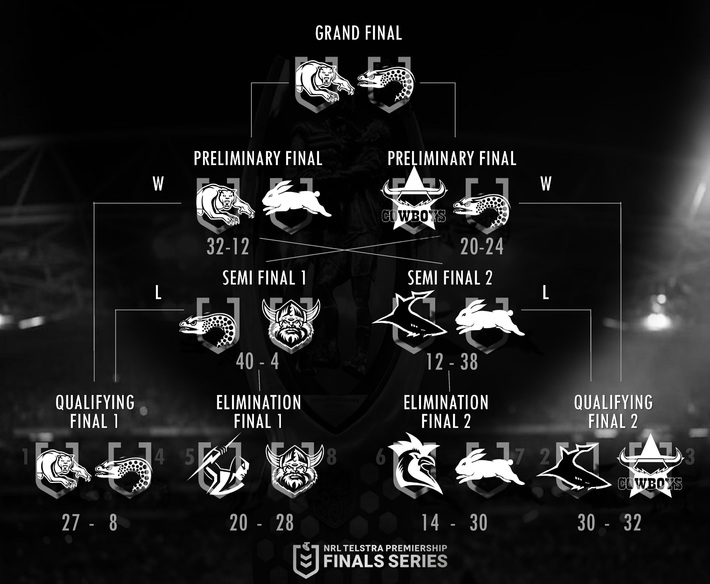 The Eels lost most stats in the Cowboys game: worse completion rate, lost the territory battle, had fewer runs, a slower play-the-ball speed, and less overall meters. However, the Eels had 15 to 7 offloads, a greater average set distance, more kick return meters and more kick meters, and 9 vs 24 ineffective tackles. The Eels’ first half was not ideal: 11/18 (61%) vs 19/21 (90%) completion rate, conceding 38% to 62% territory, 3 vs 19 tackles in the opposition 20, and 2 vs 8 errors. Yet the Eels won that first half where it mattered: more line breaks and offloads, less missed and ineffective tackles.

What these somewhat odd stats suggest is that the Eels were effective with and without the ball, when and where it mattered. They owned the big moments, taking their opportunities, while defending their errors.

If stats from the Cowboys game mean anything, for the GF, maybe it is the Eels 15 vs 7 offload count? Having moved the Cowboys around all game, the Eels defied pundit’s predictions that they would fall over in the final stanza of the game, instead scoring late points and defending their lead.

The Rabbitohs tried the same thing against Panthers, winning the offload count 14 vs 5. But the Rabbitohs conceded 5 (vs 2) line breaks (verses the line breaks being 6-6 for Eels Cowboys), missed 41 tackles and made 6 ineffective tackles, and failed to convert much of their red zone ball (count was 18-30 in Panthers favour of tackles in the red zone).

If the Eels can sustain their offload game, yet limit line breaks, make the most of their attacking opportunities, and of course play for 80 minutes … this is the way.

Oliver Twist, just by saying “please sir, I want some more", set the tone for underdogs everywhere. Cinderella, by being gracious, lived happily ever after, time immemorial. Frodo Baggins saved the world, by assuming the burden of the ring. Hannibal thwarted the Romans, 219-203 BCE. The Bohemian Hussites defended Prague from the Holy Roman Empire and the Catholic Church, in 1420. The Rebel Alliance defeated the Galactic Empire in 2-25 BBY. Finland Resisted the Red Army in 1939. Rocky was a champion 1976-2006. Leicester City won the Premier League in 2016. Ender Wiggin in Ender’s Game was the small kid who used his wits to win. Harry Potter lived under the stairs, for Christ’s sake, but defeated the most evil and powerful wizard in the world.

Few give the Eels a chance. But there is a politics to being the underdog who is actually feared. Your legitimacy is questioned despite contrary evidence. Case in point: Annesley in his press conference suggested BOTH that the Moses pass to Papali’i was forward and that Hess interfered with Moses in the play the ball. Each try should have been disallowed, he suggested. Yet watch something like NRL 360 and the only admission mentioned is that Moses’ pass was thought forward.

No doubt, and it is a mark of respect, the Panthers have been the dominant team since 2020. 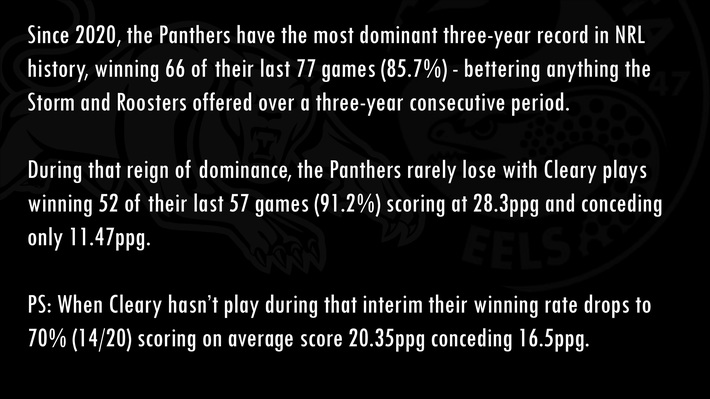 The Eels have fared better than most against the Panthers, though winning margins between the two teams vary from close to blowouts, indicating a degree of unpredictability. 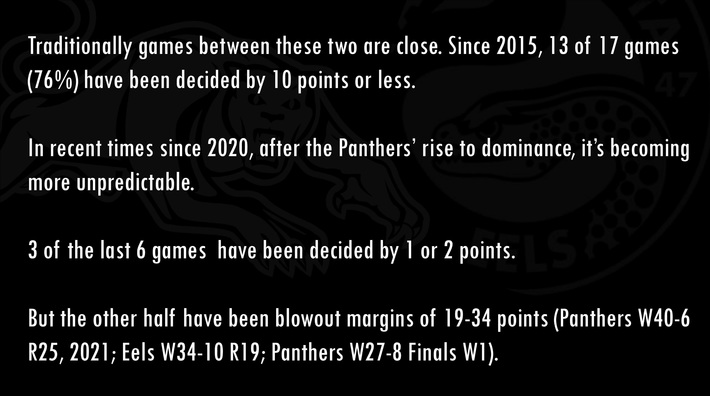 Yet despite pundits universally picking the Panthers to win, historically speaking the Top 8 teams entered the finals well-placed to give the premiership a shot.

With credit to The Rugby League Eye Test, grand final winners since 1998 have predominantly been drawn from the bottom-right good defense/good attack quadrant. 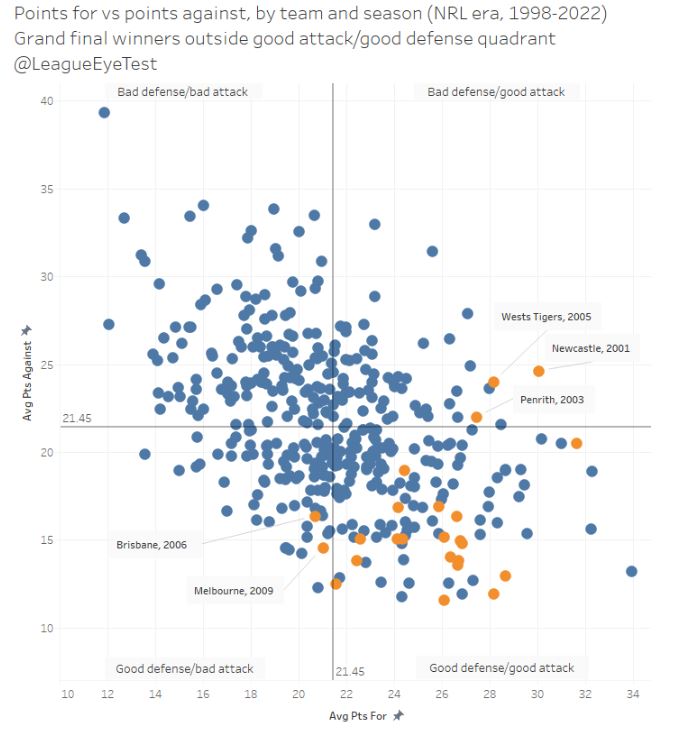 And in 2022, seven of the eight teams making the Top 8 landed in the good defense/good attack quadrant. This includes the Eels, with a late season turnaround defensively. 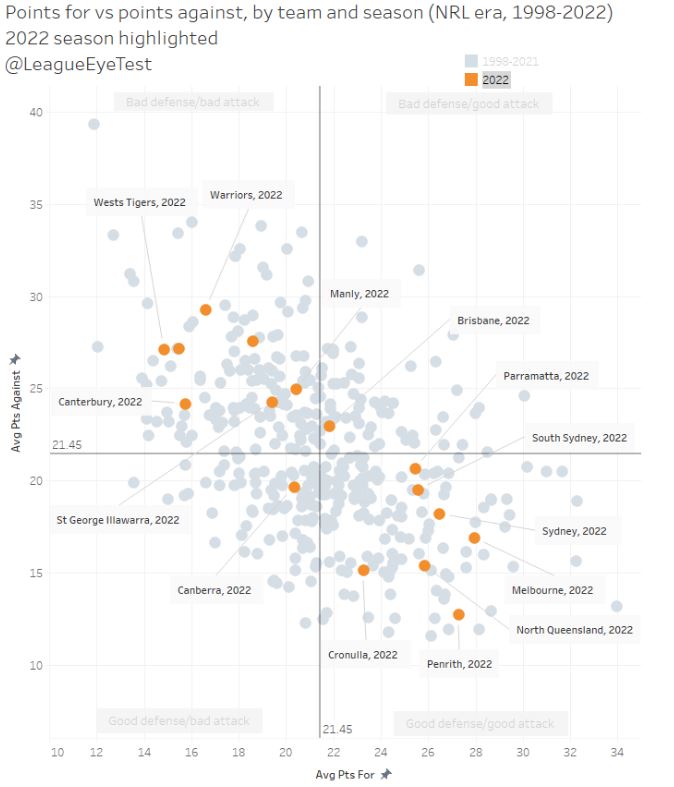 The only team from outside this good defense/good attack quadrant to make the Top 8 in 2022, the Raiders, were comprehensively thrashed by the Eels 40-4 in Week 2 of the finals.

Overall, with due respect to the Panthers’ demonstrable consistency, making the Eels rank outsiders overlooks both the record of the Eels against the Panthers and fact the Eels landed in ‘the premiership zone’. It's not unicorn stuff to say the Eels can win this thing. It's reality.

If the Eels can knock over the Panthers for a THIRD time this season, not only will it deliver Eels the premiership, but it will replicate the year the Eels won their first premiership.

Forget history per se, this is FATE. An anecdote: another 1Eyedeel member (yo Phil Mann) and I had brunch the morning after the Cowboys game. As we left, we realized we had been sdeated at Table 81. As we walked out, Table 86 was directly in our path. This is FATE my friends.

Thjere is more. This is the second straight season where the grand final is a rematch of a week one finals match. The Panthers defeated the Eels in week one of the finals. But since 1999, from the five times we have seen the grand final be a week one rematch, the side winning week one has won twice (Tigers v Cowboys 2005, Roosters v Sea Eagles 2013). Whereas the losing side from week one has reversed the result and won the grand final THREE times (Storm v Dragons 1999, Cowboys v Broncos 2015, Panthers v Souths 2021).

Finally, with all the coverage of a potential Panthers dynasty, we can overlook two crucial facts. One, Dynasty was a stupid piece of American 1980’s schlock TV that lost its way and tried to be camp to cover its emptiness. Kind of like the Panthers have earned the tag of arrogant clowns who every neutral fan wants to barrack against.

The bottom line is that IT IS OUR TIME. In the past decade, teams that had long periods without a premiership have broken their hoodoo to take the title.

This has been an emotional journey. The Eels have won THREE straight just twice in 2022 (Round 3-5, Rounds 23-25). After defeating Raiders in Week 2 and Cowboys in Week 3 of the finals, winning the grand final would be a THIRD straight win for the THIRD time. But it has been an emotional journey due to those 36 years, which of course in numerology is multiples of bloody THREE.

So, maybe we end with THREE images, in this preview. Though on Sunday night, I predict THREE (or more) cheers. 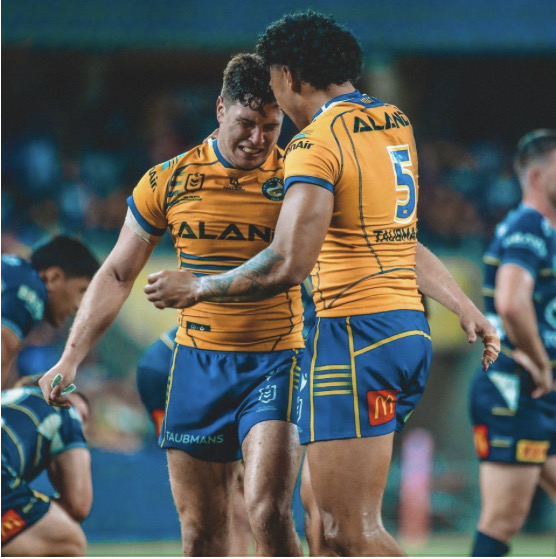 Which Eels fan does not get an instant lump in their throat, knowing Moses’ partner had just had their first child and he had just helped win a preliminary final to make the grand final? The emotional release of it all was in plain sight.

But the emotion was there for Eels fans too. Some managed - through no fault of their own - to have those emotions captured on national TV. Below is Paul Glavin, captured on TV being like every other Eels fan after the win over the Cowboys (interviewed HERE about it all). I salute you, Paul. We are all Paul now.

And the other image is a screen shot of my own Twitter post, just after we won and put ourselves through to the grand final. Suitably adjusted so you fellow Eels tragics don’t doxx me, and I hope you’ll forgive me the personal intrusion, but it just felt like the Eels had turned some magical corner. The demands of the outside world had no purchase. The days leading up to the grand final should be where we rejoice in our team’s accomplishment to date. We should also keep in mind the long emotional journey to ditch that post-1986 hoodoo. Be kind to every Eels tragic out there. But also, do not ponder all the possibilities. Just think of the best result. That’s bravery. 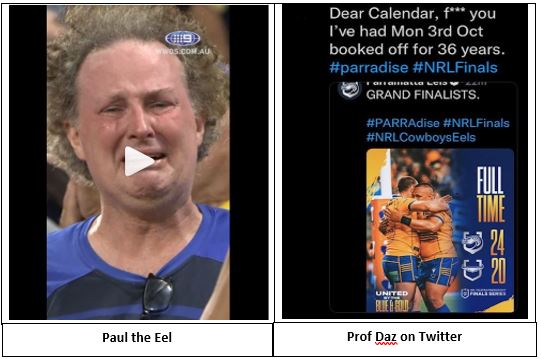 "I am the same with INSUX. Hate the music. I think I was the only person in Aust that wasnt sad that MH hung himself."
"100% it'll make them stronger but  they aren't in a position to win the comp though this is the thing.Moses definitely makes them better no doubt but enough to win he comp no chance.
This is what I'm getting at with both our halves going else where…"

"Sorry PT47 but disagree.
Hate there music with a passion and will even go as far to change stations if one of their songs start to play."

"Have Taupau and Allen even been announced or confirmed in any way?
As for going better next year, our roster has weakened so not sure about that.
Also a lot will depend on our halves situation. If one or both halves sign elsewhere for 2024 onwards,…"
More…
Loading ...

What are everyone's music tastes?