New-model Saab's test drive leaves dad with mixed emotionsAdrian ProszenkoBy Adrian ProszenkoJuly 25, 2019 — 7.30pmShare on FacebookShare on TwitterShare on WhatsappSend via EmailNormal text sizeLarger text sizeVery large text size0Leave a commentJason Saab, soon to become perhaps the tallest man to ever pull on the Red V jersey, was recently summoned to coach Paul McGregor’s office.Accompanying him to the meeting were his mother and father. The latter, Pierre, is a diehard South Sydney fan, to the point his son’s introduction to rugby league was with the Merrylands Rams because they wore the red and green. But as they sat in McGregor’s office to discuss his future, Saab felt dad should have done a better job of hiding his allegiances.Dragons debutant Jason Saab is one of the tallest players in the NRL.Dragons debutant Jason Saab is one of the tallest players in the NRL.CREDIT:JANIE BARRETT“Dad had the nerve to have a Bunnies jumper under his jacket while I was speaking to the head coach of the Dragons,” Saab said.“It wasn’t the best look.

I could have lost my job. I didn’t know he had it on until we went into the meeting. He decided to show it off so I was actually pretty shocked. I wasn’t expecting it at all.Advertisement“‘Mary’ is a pretty humorous bloke, he had a good laugh. It wasn’t too serious but I’m pretty sure he’d like to see him in a Dragons jersey on Friday night.”RELATED ARTICLEAu revoir ... France-bound James Maloney and why he'll be a hit at Catalans.NRL 2019Catalans coach confident Maloney will be a hit in the south of FranceAdd to shortlistIt just so happens that Saab’s debut happens to occur against the team the entire family grew up supporting, the Rabbitohs. Pierre couldn’t be prouder of his son, but some lines won’t be crossed.“My family and friends have been trying to get him into a Dragons jersey,” Saab said. “He’s still saying he won’t wear it.”When he runs onto ANZ Stadium, Saab will be hard to miss. At 199cm, he is the tallest man in the NRL, save for Melbourne behemoth Nelson Asofa-Solomona. When the Herald caught up with the 18-year-old winger ahead of his debut, he slam dunked a Steeden with minimal effort. That jumping ability, coupled with his speed and evasion, is the reason why Saab has made the huge leap from SG Ball to first grade in the space of a year.Advertisement“There are a lot of tall wingers in the NRL now, that might be the new trend,” he said.“As long as I’m not losing any speed, that’s what a winger needs. I think I’m pretty close to (the tallest).

There’s a couple of other tall players in the NRL like Asofa-Solomona, Campbell Graham, Daniel Tupou, Corey Oates.“We’ve got Corey Norman, Gareth Widdop and Ben Hunt - they can all kick so hopefully they can put it on a dime for me and I can come down with it.”Saab may have been one of tallest kids coming through the grades, but he was no stand out. He couldn’t make the cut in the Parramatta and Balmain junior competitions, before eventually accepting an invite to trial with the Dragons’ SG Ball side as a 17 year old.“It was pretty disheartening because I was at a school were everyone was contracted to a club or in a development squad,” he said.Advertisement“I wasn’t amongst that. It’s not about where you are as a 13-year-old, it’s where you end up as an adult.”The Australian Schoolboys and NSW under-18s flanker could well have ended up at any number of clubs after impressing for the Dragons. Several clubs offered more lucrative contracts than the three-year extension he eventually accepted to remain at the joint-venture outfit until the end of 2022.

Even though one of the suitors was South Sydney.Jason Saab is hoping for a slam-dunk debut when he turns out against the Rabbitohs.Jason Saab is hoping for a slam-dunk debut when he turns out against the Rabbitohs.CREDIT:JANIE BARRETT“I was a mad Bunnies supporter as a kid, when Adam Reynolds started playing,” said Saab, one of the few players of Nigerian heritage to make it to the top grade.“I was at the 2014 grand final. You could say Greg Inglis was my hero, the reason I played footy. The reason I love playing footy is because of how he plays - he’s tall, fast and athletic.Advertisement“When he was in his prime he was strong, just unstoppable. Every time he got the ball you lose a breath, he’s an amazing player. He was someone I wanted to play against. I got pretty close but he retired.“I had a few offers from other clubs. Some of the contracts, long-term, were better financially. But I wasn’t thinking about that, that’s not what the game means to me.“Souths gave me a tour around the club and told me how they do things, I was in their change rooms, Greg Inglis and Damien Cook’s lockers were right there. Something I wanted to do was play for the Bunnies ever since I was a kid. My dad was there as well. He was hugging the walls and taking photos of everything. He was probably hoping I would go there but he just wanted the best for me.“I just love playing footy and the Dragons are the ones who saw potential in me. They gave me a shot and there’s no one else I’d rather play for. I’d love to spend my career there if I am lucky enough.” 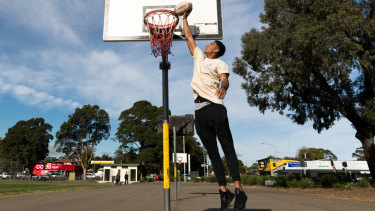 Jason Saab is hoping for a slam-dunk debut when he turns out against the Rabbitohs.CREDIT:JANIE BARRETT

Indigenous all stars v nz Maori what a corker of a game that was .