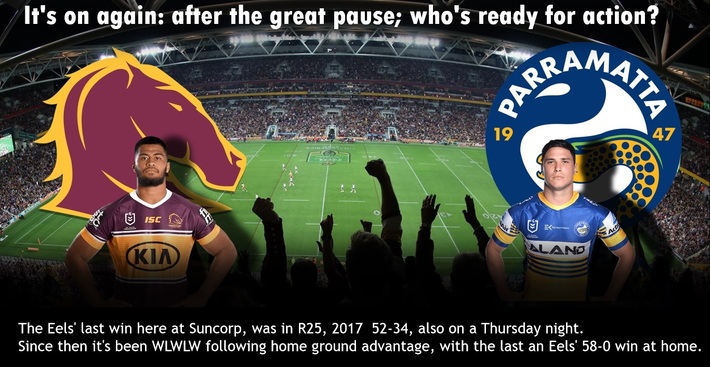 It’s on again, after the great pause. Round 2 feels like another season ago.

A new start. New rules. A new ref system. A return to one-ref, pre-2009. There are plenty of questions to be answered. It’s $1.90 a piece on Sportsbet, at the time of writing this, so even the bookmakers recognize this is a tricky game to call. Both teams are missing key players and the Broncos, a proud club, will be juiced up on revenge on their home turf, after been ragdolled out of 2019 by us, 58-0. We also have a lot to prove. Here are five points on the match:

1.Which team will hit the ground running and adapt better ?

Also, it's difficult to predict how the game will change under the new ‘six again’ rules, with one-ref, and who will benefit more. The bottom line is: no-one knows yet. 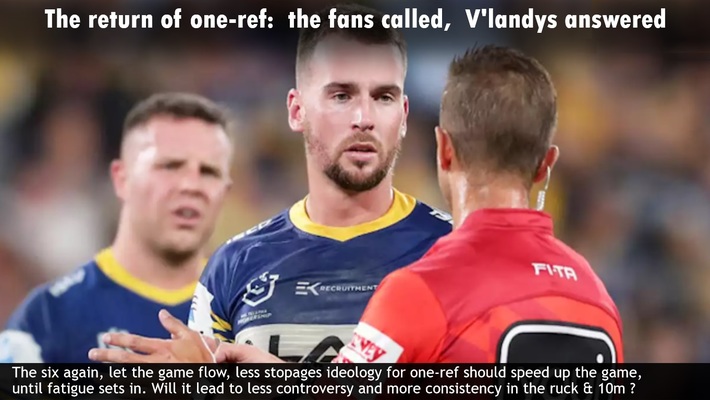 Eventually once teams are match fit, the game will probably speed up, on varying doses of steroids, especially around the ruck if the 'six again' is used often enough in lieu of stop-start penalties. Getting successive sets could be like a runaway express-locomotive not stopping at any platforms. With it, more defensive lines could get caught out offside, within the 10, as they won't have time to reset as they did previously when a penalty was blown - thus fatigue setting in quicker. Games might be won earlier.

Subsequently, winning the battle of the ruck could become a more intense battle: between defences doing whatever they can to legally slow down play versus everything attackers can do to speed up play the balls and win more ‘six-again’ possession without a pause. We could even see players diving before they get tackled to accelerate play-the-balls, as well as more effective tackling techniques wrestling the runner on their back, perhaps seeing a rise in more effective gang tackles to slow down the ruck. It will be interesting to see consistent the policing of the ruck and 10m simultaneously, now that the second pocket ref isn’t there to help, at point blank; and whether touch judges and the bunker play a bigger role to counter that. With us missing Brown our ruck defence may be more vulnerable. As such, with all that in mind, getting off to a good start on the scoreboard could be critical. We don’t come back all that often, and may be rusty.

2. Half time score could be telling

In over thirty years, since the Broncos' inception in 1988, we have never come back from a half-time deficit, to beat the Broncos at Suncorp.

Last year, we did not win any of the nine away matches we were behind, or on equal-footing, at half time.

However, we fare better at home games. We managed to win three from four matches we were behind at home, last year. Also, once in this century, back in round 21, 2017 the Eels have managed to come from behind at half-time against the Broncos - at home, ANZ Stadium, when we came back from a 12 - 14 half-time deficit to win 28-14.

Last year, astonishingly, we failed to win a single away game against a top-eight team.

Ironically, the last time we beat a top eight team away was the Broncos at this ground on a Thursday night, back in R25, 2017 in front of almost 30,000 fans. 52-34. Michael Jennings, Brad Takairangi , Mitchell Moses are the survivors of that 2017 team. Milford, Alex Glenn, Boyd, Oates, are the only survivors of that strong Broncos team (that finished third, with us fourth). 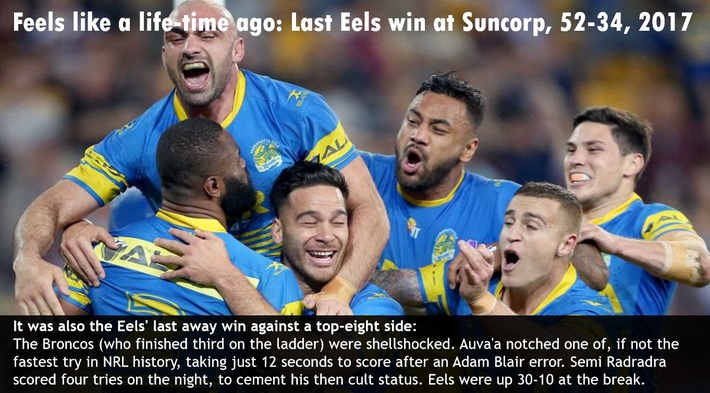 It should be easier, this time round, without tens of thousands fans cheering for the Broncos. Personally, I’ll count it as evidence the tide may be turning for this team, one step in the right direction, if we win. And evidence we haven’t got it together if we don’t. We’ll never have a better opportunity to win away, than now. It's time to change the program.

Oddly, in his extensive eleven year career, he has never officiated a Broncos-Eels’ match as an on-field ref. Overall, we have a poor record under him (33% to Broncos 55%). However, last year it swung the other way: we won three from four matches under him (all at home), whilst the Broncos lost three from four. 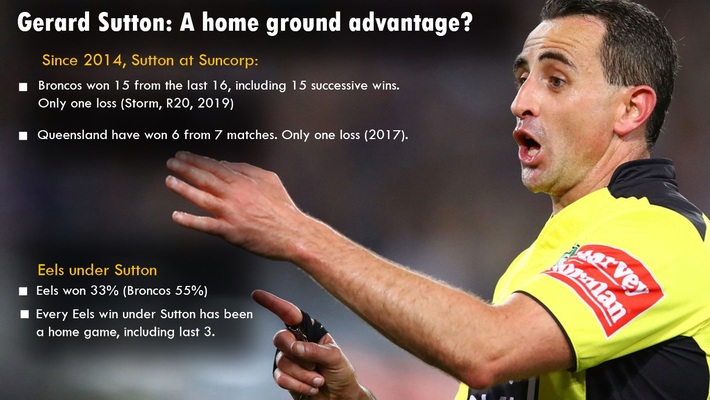 At Suncorp, the Broncos have thrived under Sutton, winning the last 15 from 16 games from 2016, including 15 consecutive wins - only broken by last year’s R20 loss to the Storm. At Suncorp, Queensland enjoy the same home ground advantage: they have won 6 from 7 games under Sutton against the Blues. Meanwhile, the Blues have also won 7 from 9 under Sutton when home or at the MCG. Going by history: the Broncos might enjoy a slight home advantage under Sutton.

5. Will the Eels deliver or will the Broncos get revenge?

"It’s a good thing to be mentioned … (But) we know what happened in ‘18, so that wasn’t fun. You have to live up to the pressure if you want to win it. It’s there now."

There is a lot of expectation on the Eels. Pressure we haven't always handled well. I remember 2001, as well as 2018. Meanwhile, revenge will be on the Broncos' mind. They will want to make amends to their fans for that embarrassing loss. They appear set for a better year, but will they improve their defence or implode again under pressure?

On paper, we look the more talented team, but that counts for nought. For the Eels to win this, on their own accord, rather than the Broncos lose it, they need more hunger, desperation, speed and urgency in their defensive line and ruck than shown in their first two outings, before they can contemplate playing more expansive football. Hopefully their fitness levels are good, as it’s highly likely one team will fade and the score follow suit. This is an important character-defining game for the Eels and a game that could prove more difficult than many Eels’ fans suspect. Late on Thursday night some of these questions will be answered. The scene is set for an absorbing battle. We still have a lot to prove. Will we stand tall?

"Especially for one with no natural ability ....lol
Just thought about that again....he probably has as good a defensive technique than any other player I can think of currently playing NRL.....he has no natural ability? mind boggling how he got to t…"

"Nothing you can teach me Pops. Don't need your out either.
Your opinion is DB will be a future champion number 6, mine is he will be good,  NEVER a champion 6
And right now the stats say Iam right and your wrong, yes stats are not everything and do…" 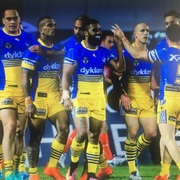 "Why would anyone want to play for manly? I found it odd that jr. and klemmer didn't make the top 5 props. I think they are the best 2 props in the game "
More…
Loading ... 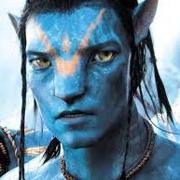 The harder you work, the harder it is to surrender

Our Pack vs Manly