Sybil (1973), by Flora Rheta Schreiber, is a book about Sybil Dorsett (an alias for Shirley Ardell Mason), who was treated for multiple personality disorder (now called dissociative identity disorder) by her psychoanalyst (Cornelia B. Wilbur). As the sub-title of the original edition states, Sybil had 16 separate personalities. It might be too kind to suggest the Eels are less psychologically troubled, having only a maximum of 13 separate personalities on the field at any given time. Yet at the very least, the Eels display multiple personalities as a team and often in the one game. As Schreiber wrote of Sybil, “She seems to be more than one person. A dual personality? Sybil and Peggy, totally different from each other” (Chap. IV). Note ‘Peggy’ was assertive, confident, and often angry, while an old-Sybil (versus main-Sybil) was diagnosed with neurasthenia: listless, fatigued, bodily weakness and exhaustion, anxiety, and weakness in the nerves. The Eels play like main-Sybil, manifesting different personalities. The Eels can play like the aggressive and confident Peggy: they rank 3rd overall for attack, are 3rd for run meters per game (1,475), 5th for tackle breaks (30.6), 3rd for tackles in the opposition 20, make the second least number of errors per game (8.7), concede the least number of penalties per game (4.7), and have the best completion rate (83%). But the Eels can also be like old-Sybil, listless and weak of nerve: they rank 9th overall for defense, conceding the most line breaks per game (6.1), missing the second most tackles per game (32.1), and conceding the 6th most offloads per game (9.8). The Eels played exceptionally to beat Penrith and Storm away, knocking over the teams everyone thinks will compete for the GF. But the Eels also played listless vs Tigers and Sharks, hopeless vs Cowboys, and ineptly vs Roosters. For the Eels it is really a matter of which personality is going to run out on to the field, and which personality will be manifest during the game for the longest? Welcome to Round 11. 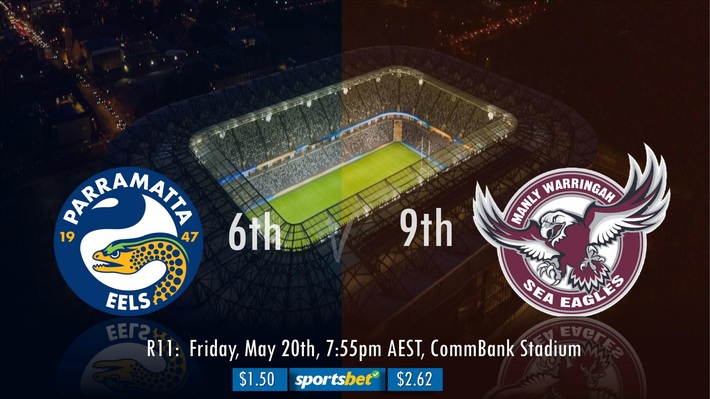 Notes: for the Eels, Matterson takes N. Brown’s lock position, with Brown reverting to the bench. Promotion/demotion or rotation? Cartwright’s 8 minutes of game time (if lucky) is to be assumed by Niukore, returning from injury (expect Niukore to play more minutes). For Moanly, Des has gifted the Eels one opportunity, with Morgan Harper returning at centre for the injured Trbojevic III; but also created a headache, with Josh Schuster (the kid can play) returning off the bench. Expect Schuster to target Moses on the Eels’ right edge.

Only for a football team with multiple personalities can it make any sense to say that the Eels deserved to lose that game to the Chooks, but the Eels should not have been in a position to lose that game. Consider the first half statistics: 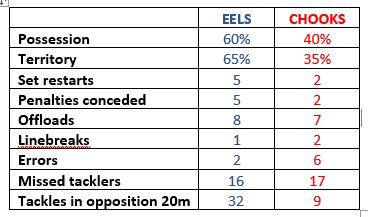 The Eels trailed at half time 6-21. Seriously, is that what anyone would predict from those stats? Yes, Opacic was in the sin binned from the 16th to the 26th minute. But the Chooks led 12-6 when Opacic was sin binned and 14-6 after the penalty, and the third Chooks try was in the 25th minute for a 20-6 lead (a FG on half time for 21-6). What stands out is that the Eels conceded penalties, piggy backing the Chooks downfield, and then were utterly incapable of defending their own red zone: JWH scored from the 10 because nobody hung around to tackle the person with the ball; Teddy scoring from a kick from the 30 that Gutho fumbled; Walker chip and chase from the Eels 30 for a try (Gutho in line while Opacic off and Papali’i had not made it back into the line); at least three close calls otherwise (score line could have been closer to 6-30+).

If we look at the second half, the Eels had 50% possession, but the Chooks had 59% of the territory. Most stats were otherwise roughly even (offloads and linebreaks the same but the Eels had 3 to 0 set restarts, 3 to 0 errors, 26 to 21 missed tackles). Still, the Chooks had 4 tackles in the Eels 20 but scored two tries, both to Suaalii. Each try began as breaks from the Eels’ 40m but the Eels never regrouped and the Chooks ran in a try on the next play or two. The Eels actually only had 2 tackles in the Chooks’ 20m, but Moses put Papali’I through a gap from the 21m, Moses twinkle-toed kicked his way to a try from the 35m, and Matto barged over from the 10m. Again, the Eels’ inability to defend their own red zone was their undoing.

History is no guide when you have multiple personalties

The Eels should beat Manly. After all, Manly have not beaten a Top 8 side and the Eels are a Top 8 side.

Unfortunately, the above argument is not deductive, but inductive, because it relies on the assumption that past performance is an indicator of future performance. Which for the Eels is an impossible assumption to make, because the Eels have multiple personality disorder.

History is also a tie for BA and Des, so that all we know is that someone has to break the deadlock. Candidates for having an influence over breaking that deadlock include Garrick and Gutho. Though with Garrick it is a matter of him scoring many points against the Eels, while for Gutho it is sentimental. 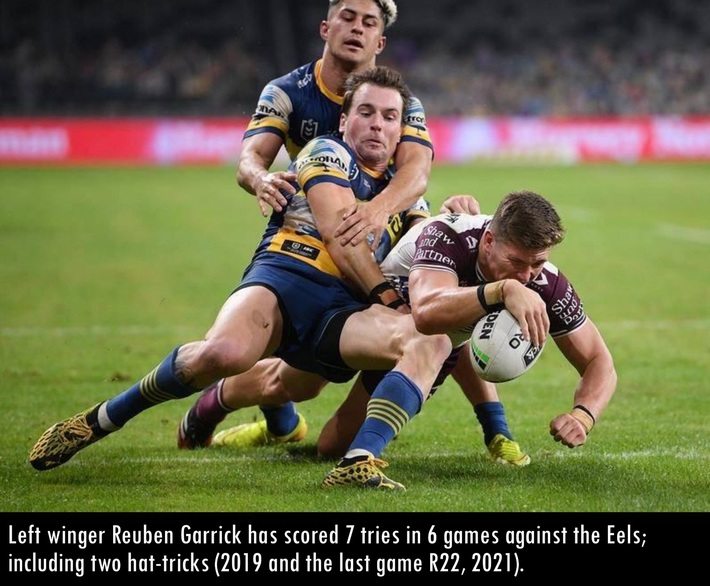 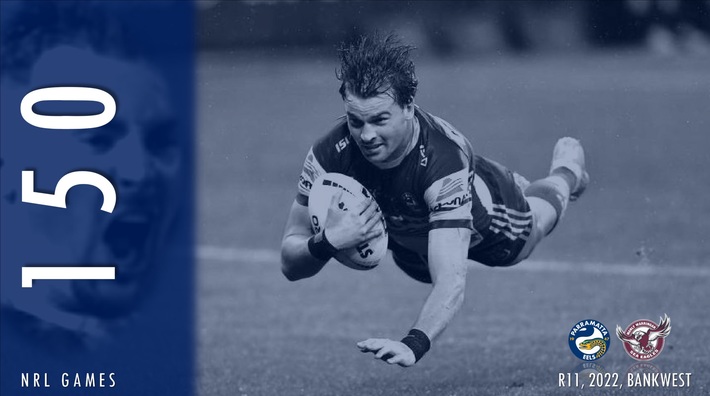 From an attacking perspective, we should be able to say that if the game becomes a shootout, the Eels’ track record in 2022 should see them prevail over Manly. 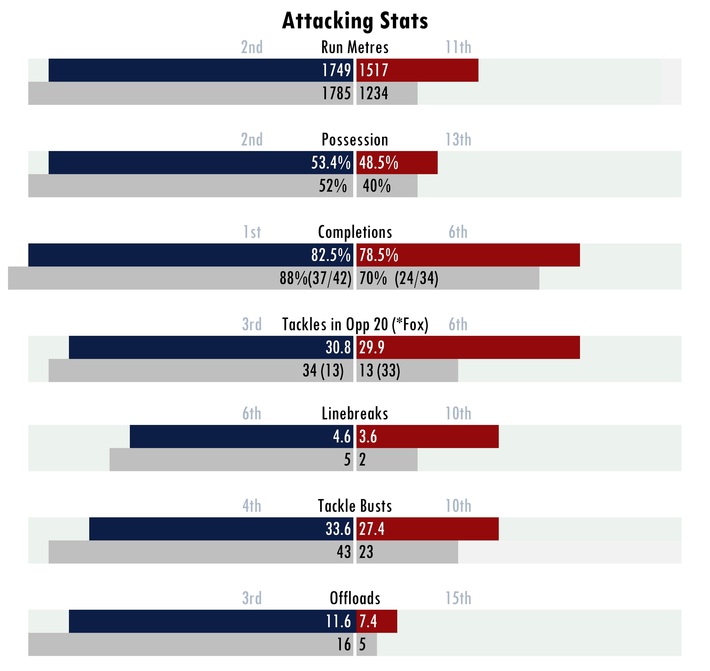 But unfortunately, the Eels’ defensive capabilities – cough, those two words should not be alongside each other – will permit Manly to have many opportunities to run themselves into form. Note below poor old HOE must live in hope, as the Defence & Discipline graphic he sent me contains some errors in the Eels favour (as the Monopoly line goes): the Eels are 4th WORST for missed tackles, and outright WORST for conceding line breaks, while pretty good at not making errors or conceding penalties. 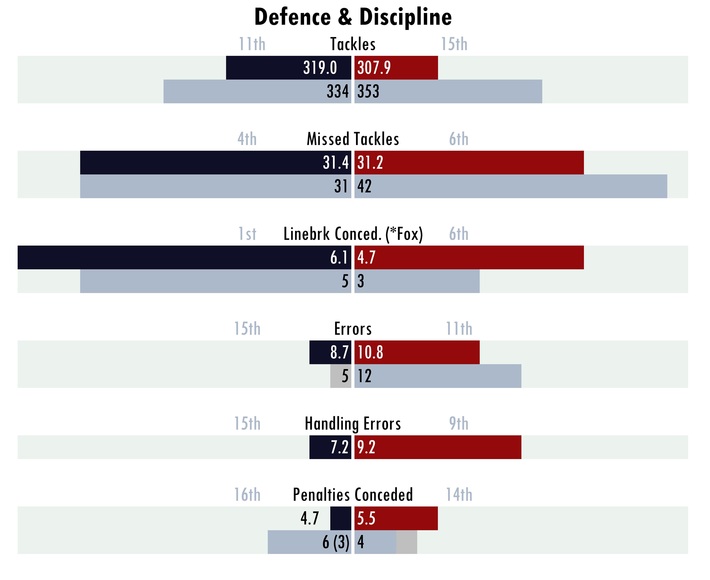 Fortunately, the LMR graph gives the Eels some hope. The Manly right-side defense is the second worst in the competition. Recall the Cronulla-Manly game where Talakai ran amok? Talakai was running at Morgan Harper on Manly’s right-hand side.  But it is only a little hope, because the Eels’ right-side defense is the 5th worst, and the mercurial Schuster, currently the biggest 5/8 ever (playing second row off the bench), will be running at them. 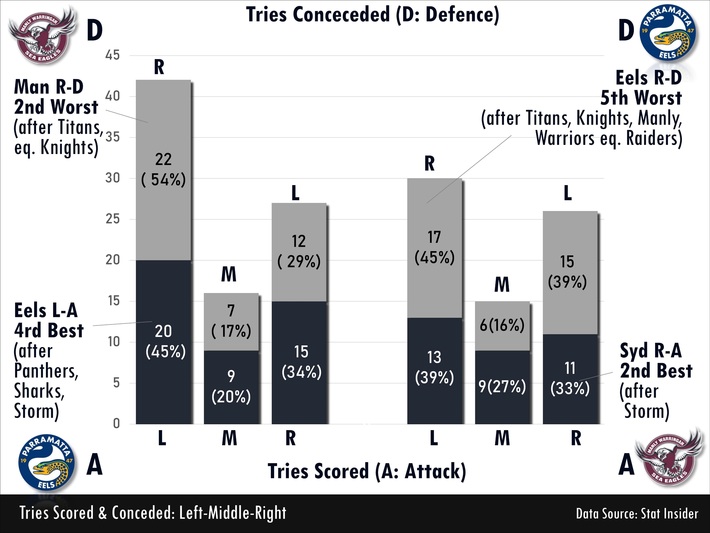 Overall, if the Eels do not do something about their truly awful red zone defense, the likes of Schuster and Turbo with ball in hand will create havoc and generate points. And we can expect Manly to get plenty of chances in Eels territory, because DCE is in the top 3 for every kicking category, and this has helped Manly to be the 6th best for tackles in the opposition 20. Put differently, Manly is nothing special in terms of tackle breaks (9th), line breaks (9th), offloads (12th), or overall run meters (12th). But DCE kicks them into decent field position, on the back of having the 4th best completion rate. The Eels’ kryptonite is, quite simply, if the other teams get into their red zone (especially if it is via a line break, as the Eels struggle to reset their line).

Overall, the Eels consistently manufacture enough points to win games, but cannot defend. Note the Eels’ winning margins have been: 4, 4 (tied at FT), 34, 6, 37, 2. The Eels’ losing margins have been: 2, 1, 31, 7. Aside from two blow-out victories and one blow-out loss, the Eels have played seven games where the average margin was (21/7) three points. The Eels’ defensive frailty keeps teams in the contest, even if the Eels win.

Can the Eels continue to bank on their attacking prowess generating pressure on the opposition? Against Manly, the Eels’ attack has broken down in recent games.

In the end, it is really all a matter of which Eels team is going to show up. BA this week noted the Eels have been inconsistent and called on senior players to step up. Gutho even quantified it, saying only four to five were playing consistently. This allusion to inconsistency reminds me of Debbie Nathan’s 2011 book Sybil Exposed. Nathan is an investigative journalist and claimed that records of the transcripts of Dr. Wilbur’s interviews with Sybil (Shirley Mason) display some inconsistencies. Nathan’s account certainly cast doubt on whether Dr. Wilbur had administered appropriate care to Sybil, but in general, some journalist reading detailed psychiatric assessments of someone with dissociative disorder and finding not all the stories line up is … well, Sybil’s mind was a little fractured, Debbie! If you are not sure what personality is your real personality, inconsistency is just what that looks like on the outside. Go Eels (the good one).

"Brissy, what are your thoughts around a coaching change for 2023? You'd prefer to stick with BA, or do you have any preference on a replacement?"

"Poor old Stephen must be helping the Lads out in the bush league.I'll concede, BA = Good Coach just no longer what we need."

"Well Cap, i would say Ciraldo could be better than Fitzy, and we have a better line-up than Cronulla this year, so who knows who Ciraldo could do.
Ciraldo is very smart and patient operator, he would not take any job. Other coaches on the market…"