History suggests this is as big, or an even bigger challenge, for the Eels than our wins over the Panthers and the Storm; the scalps of the two biggest Tyson-Fury like heavyweight champions.

For one, there is a fourteen-year hoodoo. And we have only won 1 from the last 6 games.

A wet, rainy Magic Round also presents the first Suncorp-meet for both teams. Both teams had impressive rebound victories, after demoralizing losses the week before in round eight, and will be hunting back-to-back victories to rebalance the ship with some much-needed consistency after stalling the engine a few times in 2022.

But during King Arthur’s reign, the Eels have struggled against the chooks like no other team.

Also, it’s Tedesco’s 100th game for the Roosters (190th NRL game). That small slice of history will mean something to them.

Ref: Adam Gee (2011 to now) has never officiated between these two as the on-field ref. Both teams are a bit scratchy under him; both have only won 2 of the last 5 with him blowing the whistle; but the Roosters have the slight edge under him (winning 65.2% to 57.7%) Since Arthur’s 2014 reign the Eels have only won 3 from 10 against the Roosters - that is worse than our record over any other team.

The Eels v the Roosters have not won outside of Parramatta for 14 years. All four wins over the last 14 years against the Roosters have been at Parramatta. Home, sweet home. Continuing this rich tradition, the Eels lost the last meet 0-28 at Mackay (R20, 2021, with Jake at 7).

The last time we beat the Roosters outside of Parramatta Stadium was when we won the Jack Gibson Cup in 2008 (Round 22) at Allianz Stadium. 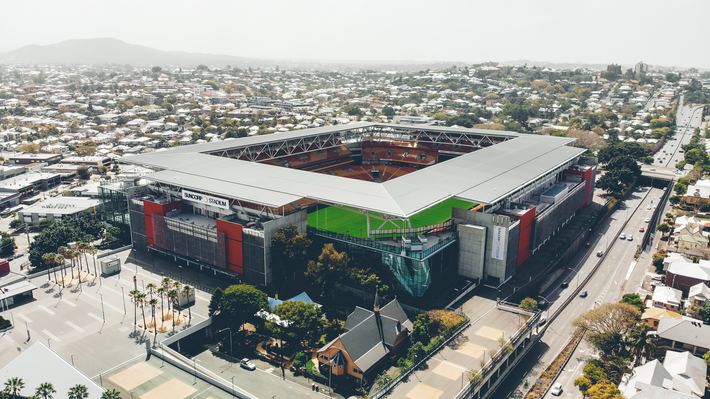 As the first meet here met here, this could be the perfect time to break the fourteen-year hoodoo. After all, we have a better recent record here.

We have won the last three straight, and 4 of the last 5 including a round 24 win over the Storm 22-10 who had all their Origin stars (no excuses). The Roosters have a spottier record winning only 5 of the last 10 here, without recording back-to-back wins for over eight years (since R3, 2014). 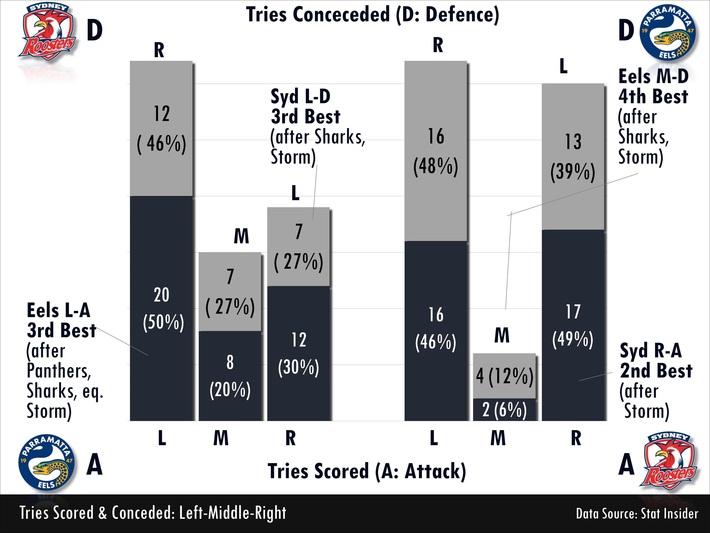 The Roosters have been below expectations this year and their attack been clunky before the 44-16 demolition of the Titans (before Tedesco stepped in with three tries), and their left-edge has almost kept up with their famed right edge attack this year.

Left-winger Daniel Tupou keeps rocking, seemingly year after year. He has scored 10 tries in 12 games against the Eels and is a handful. 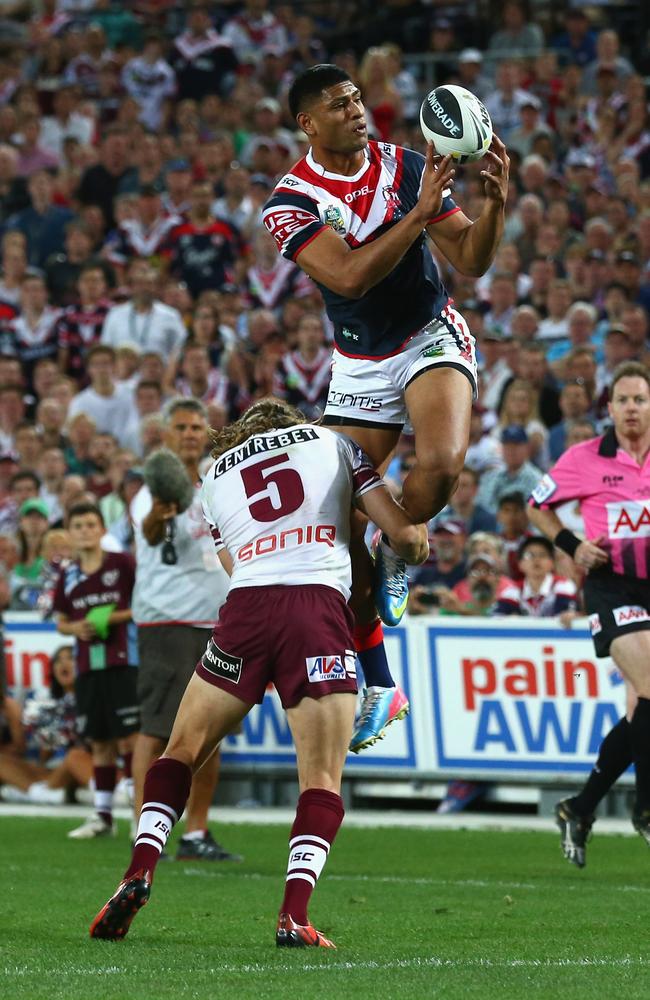 Expect a Roosters’ aerial raid for either of their giant slender-men; Suaalli (right wing) and Tupou (left wing).

Last week their famed right-edged (2nd best) was starting to click with Tedesco wrecking havoc. Expect him to be everywhere, and Manu is in career-best form.

Earlier this week, sage Opaic revealed the key (at 1:03) to stopping Tedesco and the white-hot Manu: “Tackle him”.

However, the Eels have definitely beaten the Roosters coming from behind at half-time - in the last century. Good times. 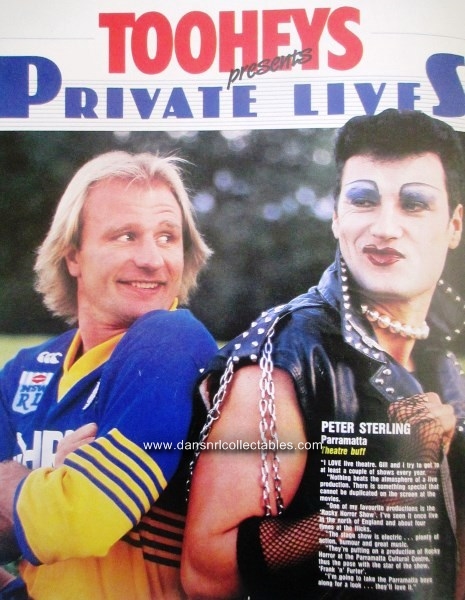 However, our half-time woes are not all doom and gloom.

We have won one game away from home when behind at half-time in the last seven years. The scene of the crime was at Suncorp of all places v the Broncos (coming back from 0-16 to win 24-16, R1, 2021). There was also one other win from behind at TIO Stadium v the Raiders (coming back from 12-16 to win 22-16, R15, 2019). Every other win from behind in this period has been at Commbank (or either Pirtek or Parra Stadium).

Ryan Matterson said it all, "We want to achieve consistency."

The Eels are consistently the inconsistent champions of the world.

We have an uncapped potential, shown by beating two heavyweight champions away this year. We showed mental toughness, and a pride in our defence then. The discipline to remain in the fight, stay focused, intense, and defend our line under fire. But, as I asked earlier in the week what’s next? Everyone wants to win, but is a battle-hardened, hard-boiled discipline -  Lombardi’s “perfect will”, the "Will To Chase Perfection relentlessly and in the process catching excellency" - consistently there?

Many Eels’ fans, soaked in realism, know a soft-bellied follow-up display could be just around the corner. And so, despite being the least-penalized team in the competition (Storm are the second, Roosters sixth for least penalized) this isn’t the micro-levelled discipline I am referring to. It’s a discipline to stay on the ball, with or without the ball. This on-off culture we have had, it’s an expression of a “gap” in that discipline; that is likely to spill from some gaps off-field as much as on-field.

The Roosters won’t want to let Tedesco down. The Chooks see themselves as history-makers, leaving a legacy, even if they do fail at times. If there is any doubt about this, just listen to Politis and Robinson speak at the Jack Gibson award nights. They won’t be satisfied being a top-four team. There’s even talk of Sombrero working overtime to get Munster in to fix the problem of being competitive but not the best right now.

They will be up for this.

They will be in our faces, hustling, bustling, and in our faces with plenty of aerial raids. It will be a heated forward clash and battle of the spine. It will take similar will and courage we saw last week against the might of the Panthers. Not just to tame the Chooks, but to tame our own demons.

Gus on Six-Tackles predicts the Roosters will prevail over the Eels over the Roosters (at 1:16:45) despite noting the Eels were impressive last week and didn't over-celebrate the win. 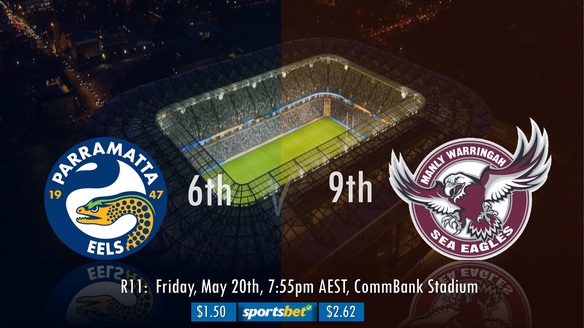 "You got yourself banned pissyeels Like a juvenile you blame others. You act like a pig and a clown yet you wonder why you got banned. "

"Specialist consultant for HIA assessments  ... he brings plenty of experience "

"I agree with that Tad.. BA plays a part in the inconsistent performances  .. it's happened enough that the club should get him some help. The focus he's giving Gutho for his 150th is off track IMO .. important yeh, but we played poor last week and…"
More…
Loading ...