In a discussion at the nursing home on Tuesday Dr Wong, well known surgeon and astute reader of the game of Rugby League and Geoff you know him as Sluggo were discussing the style of football that great teams of the past have played and that this style in particular can win you competitions purely because it is different and can create a capability for not necessarily the best team on paper being the winner.

Examples here would be the stand out teams of the last decade principally Roosters and Melbourne, now the Roosters would in the first instance be more than likely to have the best roster and Melb not, mainly because they have players that just seem to improve exponentially during a season....By the time the finals come around Melb are starting to standout as a real threat....Why ? because they play a type of contact football of keeping it alive!

This discussion came about because we noted that our 2001 side, brilliant, entertaining and breakers of point scoring records  did not have a lot of name players, personally I thought that Brad Drew was the key to the side but the real key was keeping it alive, with all players in motion.....effectively what Melb do and obviously Roosters can be very good at it as well.

Don't really see it with Raiders, Penrith or no other sides come to mind. Stop and think here, when any side is having a "day on" and really wound up for a game,we see more bodies in motion and support play everywhere......

The boys said I should put it into Blog and see how the site discusses it and ask the question why some  teams don't seem capable of doing it.

We/NRL have/had many of our coaches go through the Melb Bellamey school but nobody replicates it.....Why....what is so hard about keeping the ball alive and having all our players in motion. How many times are we flat footed in the opposition 25 and we have guys standing around like stale bottles of piss!

This is our challenge, we need our forwards and backs  to all be off loaders .....with the idea of backing up and supporting the ballcarrier and keeping it alive. It used to be called contact football many years ago with teams like Easts 74/75 sides and the great Souths side before that. I looked up Google and can see no reference to "contact" football in the presence.

My guess is we have to live the process and don't step away, be prepared when opposing sides see and learn what is happening and attempt to counter it..... with at least a plan.

Over to you guys to add to Mick and Geoff's  system of making a lessor side on paper a better one on the field!

I will start by saying motivation is an issue and by having good backup's like we do this year means we drop/rest players very quickly with a view of everyone fighting for their position...... no point in dropping  very good players to Reserve Grade unless its disciplinary, otherwise rest them, our fully fit forward line up is shaping as awesome!

First Previous of 15 Next
This reply was deleted.
Loading ...

"2019 version no brainer. 2020 version - let him go.  When he learns to run to gaps not to shoulders and use his assets to better advantage , the great fend, the 20-60 power speed he will be a top 5 winger.  His power game is just a forward runing…"

"Dreggsy, you continue to live in some form of vacuum.....I will lay a bet now that you will be suspended or have a blog or comment deleted before Brissy will.
The problem is that whether you agree or not with Brissy his discussions are topical  you…"

"I voted for you Shawnee, it's just when I got to the voting form I had no one to follow.
"
More…
Loading ...

Maika Sivo possibly on the move 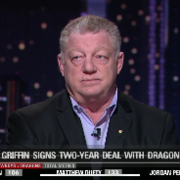