Clint Gutherson may be known as "King" out Parramatta way, but concedes his Fijian teammate Maika Sivo will be the real drawcard when the inaugural World Cup 9s kick-off at the Eels' Bankwest Stadium backyard.

"I bluffed my way to that 'King' title. I'll give it to Maika," quipped Gutherson, as the Eels' Australian contingent posed up for the Herald with western Sydney's latest league cult hero. "He should be the most popular player this weekend because of the year he has had 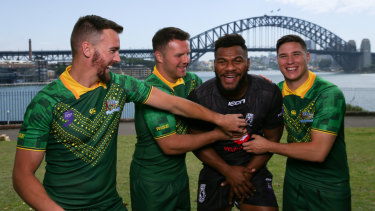 The King of Parramataa: Fiji's Maika Sivo, with Eels teammates Clint Gutherson, Nathan Brown and Mitchell Moses who will represent Australia in the World Nines.Credit:Getty

"What he has been able to do on the footy field, and to think now he will have a bit more space again in the Nines, it's scary.

"Every team has that strike power and those two or three players who can open up games.

Maika scored something like 40 tries at Bankwest this season and I'm sure he'll add to it this weekend."

Sivo burst on to the scene for Parramatta this year with 22 tries in his rookie year, including 15 in 11 games at the $360 million new home of the Eels.

Chants of "Sivo" were heard every time he touched the ball, and they are expected to continue this weekend, even though the 26-year-old will not be playing for Australia.

To prove what a remarkable 12 months it has been for Sivo, he was laying concrete this time last year and unsure if his NRL dream had already passed.

He is weighing up an extension with Parramatta until the end of 2021, but declared a return to rugby was definitely off the table.

"I still pinch myself the way I've played this year," Sivo said. "I didn't know if I'd play NRL this year. The coach [Brad Arthur] gave me my chance and I took it with both hands.

"I'm still learning a lot. I can't wait for the pre-season to rip in. I still have next year and I will let my manager do all the talking with my contract.

"I won't be going back to rugby. I want to stay in rugby league. I will take my time and think about everything."

Gutherson, Nathan Brown and Mitch Moses, who will all run out for Australia, took time out from the Prime Minister's XIII campaign last week to visit Sivo's tiny village of Momi.

They were treated to cups of kava, which had NRL officials briefly in panic as they were unsure of the local liquid would violate any doping rules.

Gutherson knew first hand how difficult it was to stop Sivo at training and dreaded the thought of doing it in a game – which could happen should the Australians and Fijians meet in a semi-final.

"I've still got his hand-prints in my face and chest and even the boot marks as well," Gutherson said. "It's never nice going up against him, you just have to do your best and hope someone helps you try and get hold of him.

"It's crazy the year he has had. We were talking about it last week when we saw his village and how much football can change lives, not just for Maika or his family or village but the whole of Fiji. It makes you tingle thinking about it."

Eels recruit Waqa Blake will also line up for Fiji and is a sight when in full flight.

Sivo has often drawn comparisons to former Eel and fellow Fijian winger Semi Radradra, who scored tries for fun before he made a successful switch back to rugby.

Senior Eel Michael Jennings played inside both and told the Herald in the lead-up to the finals Sivo had the ability to be "better than Semi".

Sivo bagged a hat-trick against Manly in the final round, palming off Manly and Australian debutant Reuben Garrick, while he bagged another double a week later in Parramatta's 58-0 qualifying final carve-up.

"Maybe I am a bit more realistic, I thought the game last night "wss the game of the round".
Melb still scare me with those "rushing moves" they tend to fcuk up us every time.
Raiders with the Pommy half and hooker are going to be a whole new challen…"

"That's why he is working on his kicking game Bup!"

"Travelling away every week will take it's toll soon enough"
More…
Loading ...

BRONCS , LEAGUE and ALL NAY SAYERS.

Other games blog not featuring the side leading the competition

is this where we are headed? - robots enforcing social distancing in Singapore

Started by Rhino in Other