Can someone explain how JWH got off, and I mean in a legal sense. There's 3 gradings careless, reckless and intentional. So what the Judiciary have said, is that JWH was not guilty of even the lowest grading - Grade 1 careless - NOT GUILTY. This defies belief as he clearly hit him flush on the head with a swinging arm and knocked him out. Now it may not have been intentional, it may not have even been reckless, but how in the hell did they say it wasn't even careless??!! And then a few hours later, they have a bloke who correctly argues 1st contact was with his chest to the shoulder of the opposing player and they deem it guilty, but won't even downgrade it as requested - yes, downgrade. Maybe Evans should have plead not guilty going off the absolutely ridiculous JWH ruling. Once again, the NRL have set themselves a new low and completely ignored previous precedents - I've seen blokes suspended for far less than JWH this year. And don't forget Michael Jennings cops 1 week earlier this year for an early plea for a high tackle when Yeo slipped and was falling. I GUARANTEE if he went to the Judiciary as not guilty it would have been upheld and that probably would have cost 2 weeks. You then look at Tapou who many commentators called as a send off offence and guess what, he cops 1 week as well - how?? Surely that tackle had to go off the careless grading and into teh reckless at a minimum. But nope, he gets the same as Evans Grade 2 for a Grade 3 - once again, please explain?? Carry over points are rubbish, the gradings are rubbish, the Judiciary is rubbish.

There is now absoloutely no doubt that the NRL Match Review Committee and Judiciary are completely inept. I'd go so far now as to say you could prove them as biased, which then leads to the fact that they are corrupt. It's a big call, but when you see the rubbish they dish up week after week that's the only clear conclusion you can draw.

Paul Kent is calling for a complete overhaul of the system. Well bugger me, but I agree 100% with Kent, it's a bloody sham. Zero consistency, zero common sense.

"Did you just wake up you Silly Old Bastard.... I thought I nailed that coffin shut!......well I nailed something....can't remember whether it was a something or a someone!"

"That's not a lump, its my brain looking for a drink! lol"

"SportsBet is the OFFICIAL partner of the NRL."

"Looks like the old man has got to save some of you from yourselves here.
Coryn - the reason you cannot "get" our attacking plan is because you are lloking for something that does not exist.
The ONLY attacking sets we have is when ALL players are ons…"
More…
Loading ... 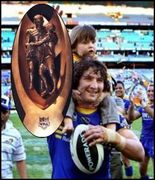